It’s all in the details

Architects don’t just draw rectangles, add doors and windows, then walk away from a design.

Interior designers don’t select throw pillows for a couch and call it good.

Instead, before they declare a project complete, architects and interior designers participate in thousands of decisions that will make a building both functional and beautiful, create an office that reflects an executive’s personality, or turn a classroom into a warm and inviting place.

And sometimes the search for the perfect detail means doing it yourself.

That’s what TSP, Inc. founder Harold Spitznagel did in 1956 when he patented a design for a hospital door pull. He designed the door pull to allow a person to enter or exit without using their hands. Seems obvious now, but TSP interior designer Heather Mergen describes it as “cutting edge for the time.” 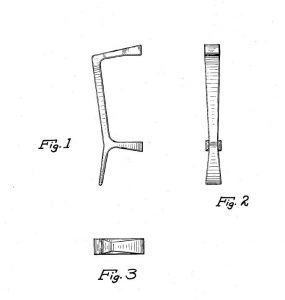 “You don’t have to put your hand out and pull and it eliminates contact with germs,” added her coworker, interior designer Brenna Wiertzema. “You can put your arm below it and pull.”

The door pull, which was granted a 14-year patent in 1958, cost $170 to go through the process. U.S. Patent #182,774 made the firm, which is celebrating its 90th anniversary this year, $29 for the year 1959. McKennan Hospital—now Avera McKennan—had commissioned Spitznagel to design a $1.7 million addition and remodel in 1955; that work likely led to the inspiration for the door pull.

TSP architect Michelle Klobassa is leading an unofficial “scavenger hunt” to see if Spitznagel’s door pull is still in use around Sioux Falls. The door-pull quest reminded Klobassa of the initial design classes she took as an undergraduate student at Montana State University.

“The term they use is intrinsic geometry, looking at the building or site or what’s already there to pull from when starting a design,” said Klobassa, thinking back to the early days of her 16-year career. “It’s what you do to make the initial designs make sense, and it’s part of the story of design, too. A lot of the time we try to have a story to tell, something people and clients can grab on to. And a year or two down the road, it’s something they remember, and they can tell the story and the rationale behind why it was done this way.”

While Klobassa has never designed a door pull, when she selects the handles for doors or cabinets, she looks for something that fits the rest of the building and its purpose. When she designed the living-space addition at Dow Rummel Village, for example, she chose pulls that would be easy for an older person with arthritis to grasp. 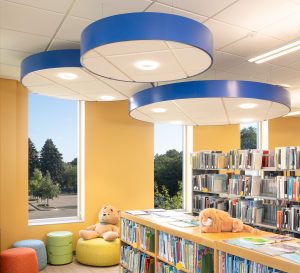 That attention to detail also was crucial in the design for the new South Dakota School for the Blind & Visually Impaired, which opened earlier this year in Aberdeen, SD. While most lighting fixtures are square and recessed, circular light fixtures that extend from the ceiling were chosen to mimic the dots of the Braille alphabet. That motif is repeated in the circles that trim the stair railing panels. Using texture and tactility on the exterior with brick and metal panels gives people with sight a visual experience while allowing those with limited vision something to touch.

Ideally, the architect and interior designer work together from a project’s beginning. Klobassa and Wiertzema traveled together to Clear Lake, SD, for the initial meetings for Tech Ord’s new administration building. The earliest discussions of the 10,152-square-foot building’s layout and furniture involved them both, and Wiertzema was able to prepare initial office layouts.

“I love being involved in a project from the very beginning because the design is so much more cohesive in the end, the details are intentional,” she said. “Space planning is really inherent to what we do and how the overall building will function for the clients we work for.”

“Whatever we bring into a building needs to perform and behave the way that’s necessary,” Mergen said.

“Fifteen minutes in nature lowers your cortisol, so how can we bring natural elements into your space to bring more calm inside,” she said.

Sometimes, the attention to details means using colors and shapes for a symbolic representation. When Klobassa designed the Marshall-Lyon County Children’s Library in Marshall, MN, several years ago, the design team wanted to play off the state’s reputation of having 10,000 lakes. Using carpeting and colors, she created a path to a seating element that looks like a pond where children can play or sit and read. The carpet pattern chosen makes the path obvious to young visitors.

For the recently completed American Indian Student Center at South Dakota State University in Brookings, Wiertzema used two main colors, red and blue, which symbolize fire and water. A lobby fireplace brings the two elements together in a location that serves as a gathering place. Wiertzema used warm and cool elements throughout the building.

“It’s fun for us when we have a client open to taking design out of the box and making things unique,” Klobassa says. “It doesn’t always require a lot of extra cost.”

Paul Boerboom, a mentor and former coworker to Klobassa, would tell her that good design comes from constraints. A project with a smaller budget makes the designer think harder, and from that comes the ability to highlight creative thinking with simple materials.

We’re on the hunt for the door pull designed by TSP, Inc. founder Harold Spitznagel, but we could use your help. If you see it on a building, please let us know. Call 336-1160 or email mktg@teamtsp.com