For more than 90 years, TSP, Inc. has advanced a culture of good work while having some fun along the way. This is the result of remaining true to the firm’s core values and giving team members a certain level of freedom in getting their work done. Over the years, the wording of organizational values may have evolved, but the core practice and meaning of these values has not.

In an inconspicuous file labeled “TSP HISTORY” lives a document that has quietly guided the architecture, engineering, planning, and interior design firm for the last 50 years.

Before that, it was lived out by company founder Harold T. Spitznagel. The document describes Spitz’s philosophy as “Design it like you own it,” and today the legacy firm lists that statement among its three core values: 1) We Before Me, 2) Design It Like We Own It, and 3) Committed To Our Craft.

TSP recently became a 100 percent employee-owned company, a milestone achievement that reflects a strong culture and a deep belief in that culture. Full employee ownership means any TSP team member who has been with the firm for a year has a path to ownership without the need for an upfront personal investment. This differs from the previous ownership structure, which included a smaller group of company leaders who were invited to purchase shares. One-hundred-percent employee ownership helps TSP carry forward a legacy that began in 1930. 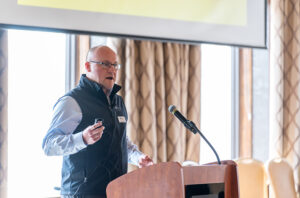 CEO Jared Nesje recently announced that the ESOP had reached 100 percent. Although TSP always intended to become 100 percent ESOP, the process happened much faster than expected. In 2019, after years of planning, TSP took the first official steps to become an ESOP. The firm became 53 percent ESOP in the fall of 2020, with the goal of becoming a full ESOP within five to 10 years.

“When a company goes 100 percent ESOP, we are quick to point out that does not happen without a lot of resiliency, especially considering the last couple of years and what the economy has looked like,” said Jess Helvik, who is TSP’s ESOP trustee.

“It is very strange in a good way to see a company do a partial transaction and then turn around and make it a full 100 percent ESOP in the amount of time that TSP did.”

Getting a timeline to come together so quickly, Helvik said, requires financial consensus from team members and buy-in from existing shareholders. 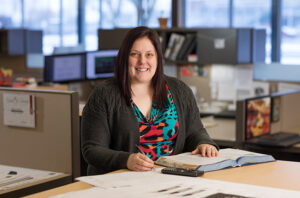 The faster-than-expected journey to 100 percent ESOP is also attributed to a very strong balance sheet and team members who view the ESOP as more than just a bullet point on the benefits summary.

“I think that looking out for the entire project team allows us to go the extra mile and try to be more helpful as a group,” said Carly Nord, an electrical engineer who has been with TSP since 2013.

“You don’t only worry about yourself and your workload, but you want to help out your teammates and make sure they’re successful in all their work too.”

The ESOP is extra incentive for team members already proud of the work they do, according to TSP architect Justin Sorensen.

“It adds another layer of encouragement to do my best and support coworkers in any way I can to increase our efficiency and profitability,” he said.

“Knowing that company profitability gets distributed to all employees encourages us to do our best work to make each project profitable and to exceed owners’ expectations for repeat business and referrals,” he said. 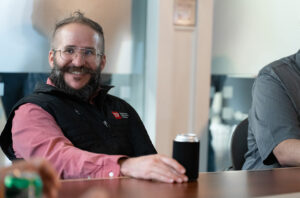 Nord and Sorensen are members of TSP’s internal ESOP Committee, and both have had the opportunity to help their peers understand the plan and its impact on company culture.

Helvik believes the firm is well positioned for continued performance and consistency.

“The future for TSP is bright,” he said. “With the cloud of uncertainty around ownership succession, that cloud is lifted; it has gone away,” he said.

Helvik added that clients and the communities served by TSP can feel comfortable knowing that employee-owners will continue to build on a legacy that began in 1930.

“We’re all in this together; we move the needle together,” Nesje said when announcing TSP’s 100 percent ESOP status to a firmwide audience.

To mark the occasion, all team members received $100 and were challenged by Nesje to do something nice for themselves or someone else.

Nesje’s announcement coincided with a kickoff to Employee Ownership Month, which is observed in October. TSP has held a series of events to promote, educate, and celebrate the value of employee ownership.