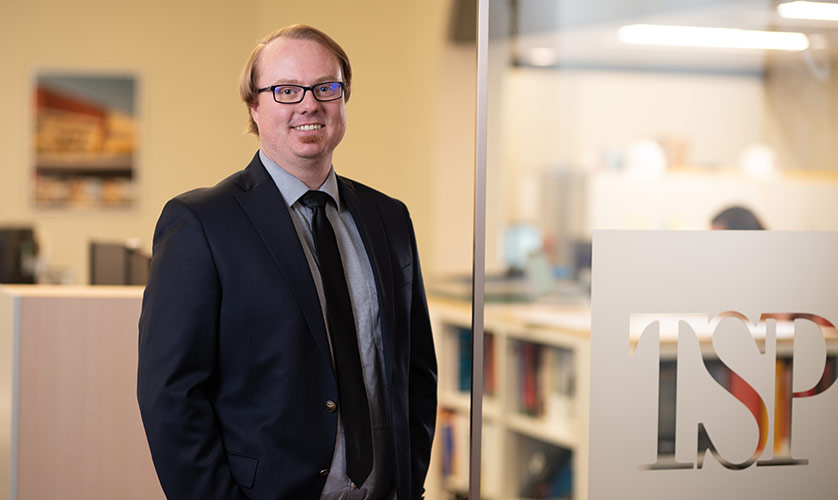 Wyoming native Brian Johnson thought he might one day work at TSP. It took him more than a decade and moves to three other states before he landed in South Dakota—and in our Rapid City office.

His parents live in Sheridan, where TSP had a location for several decades. “It was always kind of there in my mind as an internship option,” said Brian, who started earlier this month as a senior architect specializing in healthcare design.

Life took Brian in other directions, though. He and his younger sister grew up in Kemmerer, a town of about 2,700 in southwest Wyoming. He earned his Bachelor of Arts in environmental studies from Montana State University. A year later, he finished with a Master of Architecture degree and a job offer in Spokane, WA.

Not quite two years later, Brian left the rainy northwest for Macon, GA, and a chance to be in the same time zone as his then-girlfriend. It was the right move: Ashley, an unmanned-craft pilot for the U.S. Air Force, said yes. And when her military career took the newlyweds to Grand Forks, ND, Brian helped open a new branch office for his Georgia-based firm. During the couple’s time in North Dakota, Brian also worked for a few years in solo practice. The experience “taught me the value of having someone to chat with in an office,” he said.

Brian and Ashley’s latest move brought them back into TSP’s footprint—this time, in South Dakota. The two settled in Rapid City in 2017, and Brian spent the next two years with a local architecture firm.

He met TSP’s managing principal, fellow Wyoming transplant Mark Averett, through AIA South Dakota’s Design in the Hills events. Brian’s strong background in designing healthcare, residential care, and behavioral health environments was a match for project work in TSP’s pipeline and on the horizon. So was his substantial BIM experience, which includes serving as BIM manager for many large-scale projects. He’s a master Revit user and enjoys pushing those tools forward. He’s constantly learning, taking webinars and enrolling in seminars to bring new knowledge to today’s practice.

Brian applies that same enthusiasm to promoting architecture as a career for others. This month, he joined fellow TSP architect Chase Kramer as an incoming board member for AIA South Dakota. Brian also is an engaged member of the Young Professionals Group, a program of the Rapid City Area Chamber of Commerce.

“I really want to look at how we can continue to help the field grow—high school students thinking about architecture, young interns, new architects,” Brian said. “I had a very good mentor in Georgia who promoted service through the American Institute of Architects, and now I’m doing what I can to pay it forward. He served on various boards and committees and always espoused that as something that advanced his career while helping others.”

Brian’s portfolio encompasses K-12 education, recreation, civic, and defense work. But the complexity of healthcare work is his greatest interest. “The opportunity to focus a lot of attention in that area is really compelling for me,” said Brian, who is pursuing Evidence-based Design Accreditation & Certification through The Center for Health Design. He’s also a LEED Green Associate.

“Healthcare clients have a very specific mission and service they deliver to the public. I like the research aspect of it and the way the sector has been transforming in the past several years,” Brian said. “The design of healthcare environments is evolving in tandem with changes in care delivery and how providers use technologies such as electronic medical records, new diagnostic care, and genomics. The built environment has a direct impact on all that. The architect must think about a number of planning challenges for the facility’s long-term operation. Spaces need to support equipment, emerging technologies, and different ways providers and patients are going to experience the spectrum of care through the architecture.”