One by one, focus-group participants went around the table, sharing the changes they would like to see in how Peace Lutheran Church allocates its space for various programs and activities.

First, they shared their wish lists for adult and senior ministry programs—everything from making quilts and prayer shawls to gatherings that celebrate personal milestones. Monthly potlucks are so popular they overflow from their designated room into the narthex.

Then, they looked at the church building, dedicated in 1965 and last expanded in 2004. That included suggestions such as a second kitchen so funeral lunches wouldn’t interrupt daycare meals, a Fellowship Hall that better allows for quiet conversations, and a facelift for the restrooms.

As the suggestions were made, TSP Inc. architect Chase Kramer jotted them down on a floor plan of Peace Lutheran Church, while architect Michelle Klobassa facilitated the discussion and project manager Tim Jensen took notes. It was business as usual for the start of the conceptual design study that will help guide the church in making decisions that will affect it for years to come.

Ordinarily, the team from TSP would have joined Peace Lutheran members and staff at the same table, talking face to face. In this time of social distancing due to the COVID-19 outbreak, however, all five such meetings were conducted via Zoom. Next week’s design workshop with Peace Lutheran’s internal task force will take place using the same method.

Peace Lutheran’s pastors and program directors have been part of a learning curve in how to do ministry online, said the Rev. Paul Stjernholm, the church’s senior minister. Undertaking a building project online hasn’t been that much different.

“For having no online meetings prior to three weeks ago, that’s our bread and butter now,” Stjernholm said. “Having the online meetings with TSP, personally that was not a hard concept to overcome. That’s how we do business now.”

Jensen, Klobassa, and Kramer have conducted each focus group meeting in similar fashion, facilitating the discussion with open questions, then listening intently to the many ways each group uses the specific spaces, making sure every area of the 45,000-square-foot church is discussed.

Kramer uses Bluebeam software for viewing and marking up a copy of the floor plan as the comments are made. He virtually shares the church floor-plan graphic so it appears on everyone’s computer and iPad screens simultaneously during the discussion. Everyone visually references the same drawing and watches the changes and note-taking occur in real time. 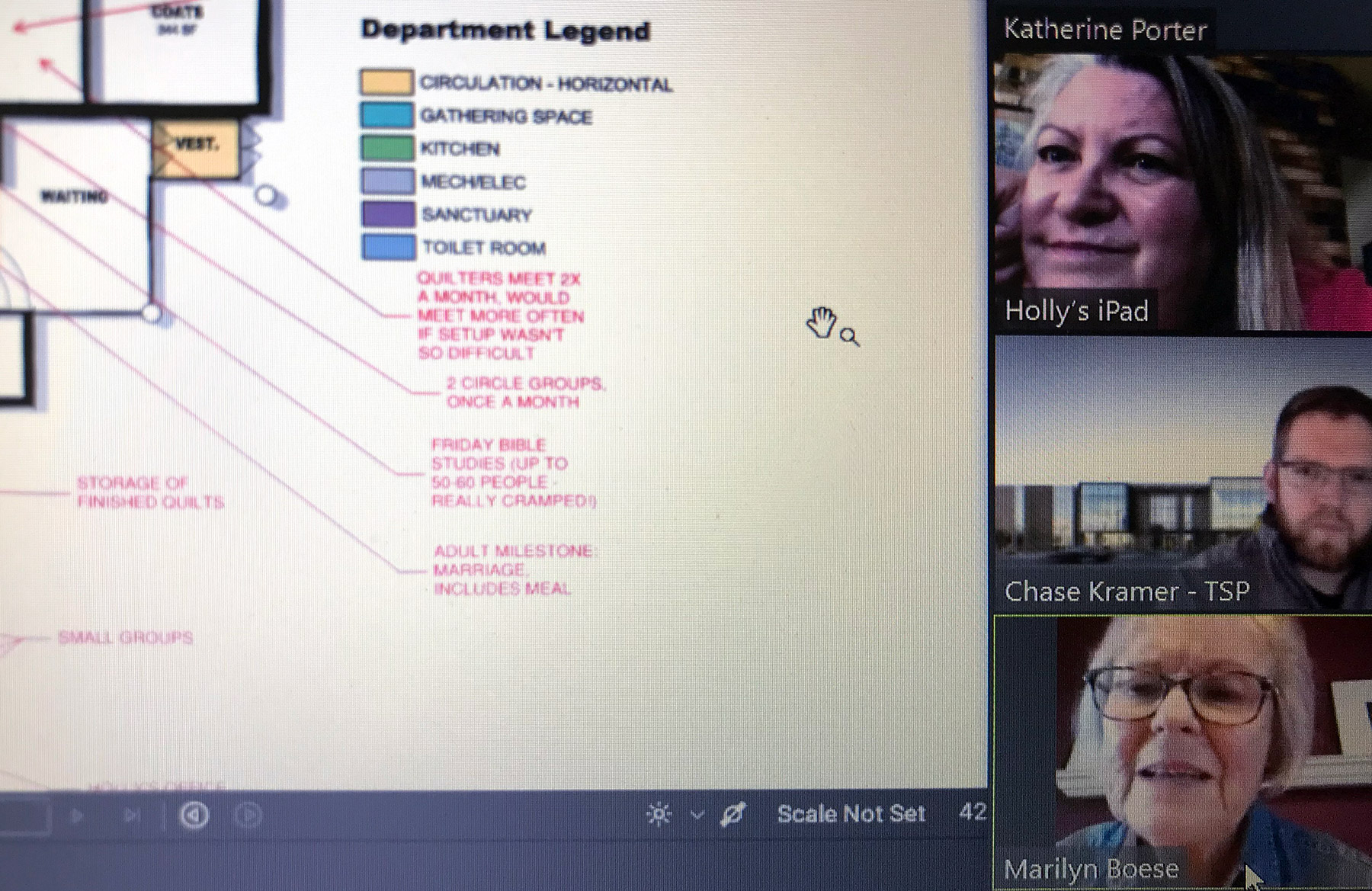 “I was making ‘redlines’ live – something architects typically do behind the scenes to send direction out to other production staff,’ he said. “This was a bit different as it really just was adding space-specific notes, but the format is similar to a digital redlining session. It was done live so we could point things out and verify we’re talking about the same space.”

Jensen sends out agendas before each focus-group meeting. The online process reinforces the need for good communication between TSP and its clients, he said.

“There’s always a need for that, but we probably put a little more emphasis on it than we would in normal circumstances,” Jensen said.

Another necessity: being patient with technology.

“Sound or video may not be the best from somebody’s end,” Jensen said. “I tell them at the start of every meeting, we would prefer to sit at a table, elbow to elbow, our sleeves rolled up, moving physical pieces around on a large plan that everyone can actually point to or sketch on. But we understand that’s not an option. We’re making the best use of technology that we can.”

In guiding the session, Jensen made sure all participants had a chance to share their vision of the Peace Lutheran Church of the future. “Are we thinking we’re going to go up?” one participant asked, raising the possibility of a two-story building.

“It is more efficient when you can stack things on top of each other,” Klobassa responded. “It’s also a trade-off,” Kramer noted. “There’s a balance: How high can you go?”

At this point, Klobassa added, the question that needs answering is this: If you could have more space, what more could you do?

Church members had been answering that question internally for about a year before bringing TSP on board, Stjernholm said.

At summer’s end, Peace Lutheran’s design team will receive concepts and 3Drenderings to be used in a decision-making process that could take up to a year, Stjernholm said. While face-to-face meetings may be crucial later, conducting the focus groups via the internet turned out to be a good thing.

“Had it been up to us, the church staff and the pastors, to keep the ball rolling, it probably would have gotten dropped with all the changes taking place in our ministry because of COVID-19,” Stjernholm said of the initial stage. “I’m very glad we have TSP on board and Tim and crew keeping the pace up. Focus groups online have been a great medium. It’s easy for people to make meetings, for Chase to share the floor plan. This might be the way to do it, at least in this part of the process.”